Today was another fine day in Linz.  I was able to see several concerts including the famous Mnozil Brass as the featured evening concert.  They were spectacular and had an amazing sense of timing, memorization, and “schtick” that kept the audience howling.  We also had the massed tuba, euphonium, and trombone concert outside near the Brucknerhaus.  The Euphonix quartet played in the large concert hall and the University of Arizona tuba/euphonium ensemble played just before Mnozil Brass.  I conducted the Gershwin medley and we played the Jungle Book tune “I want to be like you.”

getting set-up for the massed low brass ensemble concert

Heiko at the massed ensemble performance.

Suke Nakata from U of A and conference host Steven Mead

Moises warming up for the Gershwin medley backstage 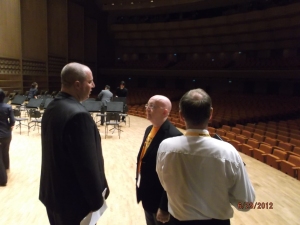 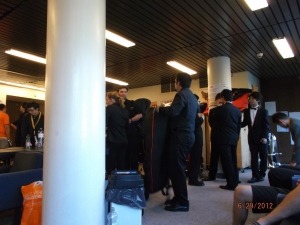 Eirik from Norway and Mark.  Eirik has me by an inch!